Our Premier League match to bet on this week is a cracker and kicks off at 4pm on Sunday when Spurs take on Chelsea at their temporary home; Wembley Stadium.

As well our Spurs v Chelsea betting preview below, we've also compiled a list of bookmakers latest betting offers on the match including some super generous price boosts.

Check out bookmakers betting odds using the ALL ODDS tab below. We've also highlighted who's offering the best odds on a home win (H), an away win (A), or a draw (D).

If you're going to be betting on the game, take a look at some of the latest betting offers and price boosts that bookmakers offer on the match below:

Spurs play their first home game of the new Premier League season on Sunday, when they host rivals Chelsea at Wembley in the highly anticipated London Derby.

After an abysmal start to the season for defending Premier League champions Chelsea, it’s no wonder most bookmakers offer Spurs as the favourites to win!

This will be a huge game for both Spurs and Chelsea, while a win for Pochettino at their temporary ground, will help calm fears about their poor Wembley form.

After a shocking loss in their first outing, Chelsea could do with a win, however Conte is missing a number of key players and they might struggle against an in-form Spurs.

If you’re betting that Spurs will beat Chelsea at Wembley on Sunday, Sportingbet.com offers the best odds at 11/10 as well as a £50 bonus bet deal for new members.

To claim the SportingBet signup offer, simply register a new account today and then once you've bet £10 on Spurs v Chelsea, you'll be able to earn up to £50 in bonus bets! 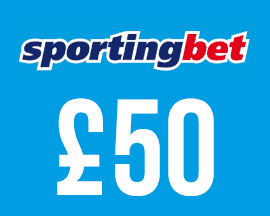 #Ad. 18+. New players only. This Promotion is available to Website customers who: are over 18 years old; are a new player with sportingbet.com; are resident in the United Kingdom. This offer is available to 1 person per household. Further T&C's apply.

Spurs had their best ever Premier League campaign in 2016/17, and Pochettino will be hoping to have an even better outcome this season and take their first title since 1961.

Although Spurs had a cracking start to the season, securing a 2-0 victory over Newcastle in their first outing, the biggest concern is how they will adjust to playing at a new home ground.

In saying that, the team looks solid and there's a reason why they're the bookmakers favourite.

Pochettino has a few injury worries with N’Koudou, Rose, Trippier and Lamela all still ruled out but it shouldn’t affect their performance too much against an under par Chelsea.

Bookmakers betting odds are pretty short on a Spurs win, so make sure you take advantage of some of the betting offers or price boosts listed above.

If you’re betting on Chelsea coming away from Wembley with all three points, Ladbrokes.com offers the best odds at 13/5.

Reigning Champions Chelsea suffered a shock loss in their first outing of the 2017/18 season to Burnley, who only barely managed to stay out of the relegation zone last season.

Although they've had a bad start to their campaign, more worrying for Conte, are the longer term issues of a reduced squad size that leaves them astonishingly short in midfield.

Chelsea will be without Cahill and Fabregas who are both suspended, while Pedro, Hazard and Bakayoko are all likely to miss the Spurs match due to injury.

With so many key players missing, Conte really needs to strengthen his squad before the transfer window closes at the end of August.

It's set to be one of the fiercest Premier League competitions in recent history and Chelsea will be desperate for a win over a team that will more than likely be challenging for their title.

If you're betting on neither team doing enough to win, Betfred.com offers the best odds at 13/5 plus a 'bet £10, get £30 in bonus bets' offer for new members.

To get your hands on the Betfred signup offer, open a new account today, bet £10 on Spurs v Chelsea, and win or lose, they'll credit your account with £30 in bonus bets! 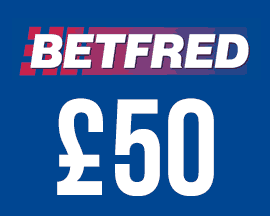 Two of the last four Premier League matches between Spurs and Chelsea have ended in a draw so this could be good bet for those looking to get some decent odds on the game.